I don’t know why, but my ‘BS-ometer’ is twitching.

Before the Eurovision Song Contest, in May 2019, 700 rockets rained down on Israel within two days.

That’s a lot of rockets.

And a lot of people were hurt and I think that three people were killed in Ashdod. (I can’t find the news report on that, so feel free to correct me on this.)

But I don’t remember back then seeing statements like this (all taken from the fake news YWN site ‘live blogging’ of the ‘war’):

6:20PM: Minister of Public Security Gilad Erdan speaks to the nation via KAN11 TV News, explains that Israel Police is in charge at present, with all other organizations and security forces operating under its umbrella due to the “special regulations” which remain in place. This is the result of the ongoing rocket fire from Gaza into Israel.

The senior cabinet minister urges all citizens to adhere to the instructions and directives of the IDF Homefront Command.

He adds the nation’s security forces stand ready for “any situation”, including “a scenario of an attempted terrorist infiltration from the sea”. The Israel Police has increased its manpower in light of the security emergency, which has led to the implementation of limited emergency regulations.

Palestinian Islamic Jihad, an Islamist terrorist org backed by Iran, is again attacking Israel with 100’s of missiles aimed at civilians. We stand w our friend & ally Israel at this critical moment & support Israel’s right to defend itself & bring an end to these barbaric attacks

6:04PM: Globes financial news explains the State of Israel has NIS 1.3 billion in reserves, pointing out it is enough for either a military operation in Gaza or another round of Knesset elections – but not both, asking “what to do?”

5:45PM: IDF Homefront Command Colonel Gil Shanav, speaking on KAN11 TV News suggests persons in areas not usually targeted with rocket fire to review regulations with family members – to discuss what everyone does if sirens are heard in the middle of the night.

This is just the last snippets, but I read this and I got the strange feeling that all is not how it seems.

I’ve been in Israel since 2005, and part of that time was spent in the South of the country, when rockets were raining down all over the place – and I didn’t see any ‘instructions’ like this being published then. I didn’t say any official announcements that Israel Police ‘are in charge of everything’ and that Israel has defacto just become a Police State.

In the meantime, 200 rockets aren’t nothing, it’s true, but what’s going on now still pales in comparison to the 700 rockets that fell in less than 2 days before the Eurovision – and there were no instructions like this, going out then.

Why would the State of Israel, and whoever is pulling the strings behind the scenes, be interested in setting us up for a ‘war’ right now?

Let’s go back to fake news YWN, for some clues:

Deep State America has been trying to get a war started with the Iranians for months and months, so they can get the green light to totally destroy Iran and take over their oil fields as well. But somehow or other, their plans to ignite World War III keep getting thwarted.

But they aren’t giving up! Let’s see if we can pick up the hint in US ambassador’s David Friedman’s tweet:

My BS-ometer pinged off when I read this, because Hamas is also an Islamist terrorist organisation backed by Iran – but they aren’t rocketing Israel.

So, why is the PIJ suddenly in the spotlight again?

It kind of reminded me of what was happening with Oslo, when the PIJ were the main ones killing Israelis, with the guns they’d been given by Rabin and Peres.

The anti-Torah forces in Israel had a big plan to create a ‘unity government’ that would accept the Trump-Kushner ‘peace plan’, while simultaneously declaring ‘war’ against the Torah world.

But, the people who are pulling the strings in Israel behind the scenes – from Europe and America – aren’t about to let a pesky thing like ‘democracy’ spoil things, no sirree!

Once you have a war going on, then a ‘unity government’ is a no-brainer, isn’t it?!?

And in case you didn’t get that message loud and clearly enough, here comes Globes – an ‘old Labour‘ mouthpiece – to reinforce the message:

6:04PM: Globes financial news explains the State of Israel has NIS 1.3 billion in reserves, pointing out it is enough for either a military operation in Gaza or another round of Knesset elections – but not both, asking “what to do?”

Honestly? This clue is by far the most worrying.

Do you understand they just formally announced that the State of Israel has been taken over by the police, ‘due to the war?’

6:20PM: Minister of Public Security Gilad Erdan speaks to the nation via KAN11 TV News, explains that Israel Police is in charge at present, with all other organizations and security forces operating under its umbrella due to the “special regulations” which remain in place. This is the result of the ongoing rocket fire from Gaza into Israel.

If things are really so bad in Israel, right now, security-wise.

Just two weeks ago, Jared Kushner was calling for Israel to form a ‘unity government’.

He’s got a ‘peace plan’ to promote here! And Israeli democracy is slowing it up! On that front, I recently read this from newsweek.com, and again, I had a strong feeling of deja vu:

[I]t’s terrific to talk about what could happen if there was peace. But the ideas Kushner presented have been raised in a variety of formats and configurations over the course of the past 50 years. Twenty years ago, the concept of “a new Middle East” was the dream promoted by the late Israeli President Shimon Peres, in attempts to induce Israelis to agree to concessions for the sake of peace. In short, Peres promised that Israel would thrive in a Middle East at peace. He was no doubt correct. Be that as it may, be, Israel managed to thrive without achieving peace.

But even despite this ‘push’ from the States, that anti-Torah ‘unity government’ that everyone wants, except for the voters, just hasn’t happened.

So now, we have a war with Gaza again.

And already, the papers are full of people urging a unity government at this critical time.

But the facts on the ground doesn’t seem to justify the enormous public ‘over-reaction’ that is being shared on fake news sites like YWN, amongst others.

And my BS-ometer is still twitching. All I can say, is that I hope the Rav is going to sweeten all this again, and put another spanner in the works.

Yesterday afternoon, they posted this up on the ravberland.com website: 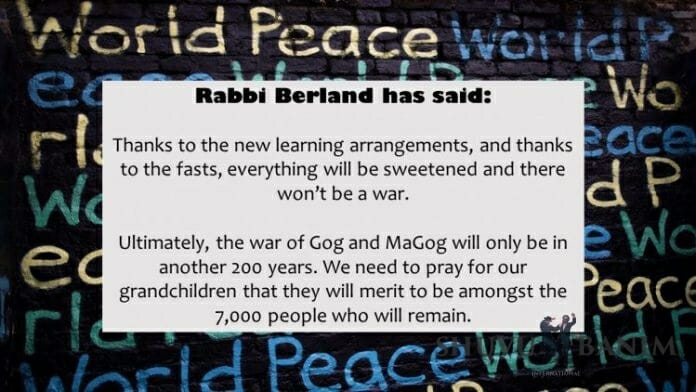 I know there’s a question about Gog and Magog preceding Moshiach, and does that mean Moshiach is only coming in 200 years, too. The Rav has said previously the good things will start to happen now, presumably that includes Moshiach coming.

If I can pull any more insights together on this subject, I’ll write something about it, but I’m really as much in the dark as everyone else here. The key is emunat tzaddikim, to just develop some simple, humble faith in our true tzaddikim, and to stop pretending we know it all – or even, anything much!

But Baruch Hashem, enough people agreed to fast and to learn, to sweeten this latest attempt to start a disastrous war in the Middle East. Long may it continue…

The opening shots in the next war

How the Talkers finally bring Moshiach

An excellent, balanced article on vaccines

Pulling back the covers

Yair Lapid on looking after Number 1

What really happened to the Yemenite children?
1 reply

The real roots of the Illuminati
Scroll to top